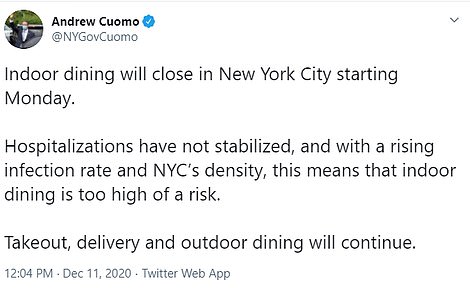 In what many are rightfully calling the nail in the coffin for some of NYC ‘s best bars and eateries — Cuomo has once again ordered indoor dining closed. According to the governors office, indoor dining will be closed starting Monday for at least two weeks amid reports that the city ‘s positivity rate is being chalked up to in part because of the bars and such.

But that isn’t entirely true. According to actual statistics, bars and such only account for maybe 1.2% of the positivity rate. Many are wondering why NYC is getting battered once again but places like Staten Island have a positivity rate of nearly 5%.

The ongoing lockdown and indoor eating ban has dealt a significant blow to some of the city ‘s more intimate hotspots where people would normally go out on a Thursday evening for example.